Phetchaburi, an important royal fort during the Ayutthaya period, now serves as a major stop for sightseeing before continuing down south by road or rail to other beach towns in Southern Thailand. The province is worth visiting for its splendid historical park and ancient temples, wonderful beaches and caves, as well as a great variety of local food.

Phetchaburi, an important royal fort during the Ayutthaya period, now serves as a major stop for sightseeing before continuing down south by road or rail to other beach towns in Southern Thailand. The province is worth visiting for its splendid historical park and ancient temples, wonderful beaches and caves, as well as a great variety of local food. Phetchaburi occupies an area of 6,225 square kilometres, characterised by thick jungles and mountain ranges lying in the west as a border between Thailand and Myanmar, and 80 km. long coastline towards the Gulf of Thailand in the east. Phetchaburi is divided into 8 districts (Amphoes): Muang Phetchaburi, Ban Laem, Ban Lat, Cha-am, Kaeng Krachan, Khao Yoi, Nong Ya Plong and Tha Yang.

Distance from Phetchaburi to Other Districts :

Hat Cha-am This beautiful beach, twinned with Hua Hin of Phrachuap Khiri Khan, is located 40 kms. south of the town or 20 kms. north of Hua Hin, and another 2 kms. along an access road. Cha-am was originally a small fishing village. After a royal palace was built near Hua Hin in the reign of King Rama VI, the land was occupied by the royal family and the elite. Today, it is very popular among Thais who love superb seafood and comfortable hotel or bungalow accommodation.

Hup Kraphong Turn right at Km.201-202, 4 kms. before arriving at Cha-am and continue for another 8 kms. This area was originally dry and infertile. In 1962, King Rama IX had an idea to help local farmers and established the Hup Kraphong Rural Development Project with the support of Israel. There were studies on various crops growing in accordance with market requirements. Tourists can buy farm produces as well as fine crafts made of hemp

Marukhathaiyawan Palace This summer palace, referred to as "the palace of love and hope" is located between Cha-Am and Hua Hin. It was built under the royal command of King Rama VI in the year 1923, with the materials from the demolished Hat Chao Samran Palace. It is a two-storeyed wooden pavilion with series of halls linking each other, and a long corridor leading to the sea. The compound is open everyday, Mon to Fri 8 a.m.-4 p.m. ; Sat, Sun and public holdays 8 a.m.-5 p.m. Admission is 90 baht per person

Lao Song or Thai Song Dam Tribal Villages These are found in many vicinities in Amphoe Khao Yoi, particularly at Ban Nong Prong and Ban Thap Khang. Their ancestors have migrated from Laos. Their old customs and traditions are occasionally practised. In April, they organize their own social events with entertainment and folk plays.

Tham Khao Yoi This cave is located behind the railway station of Amphoe Khao Yoi, 22 kms. prior to arriving at Phetchaburi town. It houses several Buddha images and was the place where King Mongkut practised meditation while he was in the monkhood.

Wat Khao Takhrao Travel 12 kms. from Phetchaburi to Amphoe Ban Laem and continue for another 6 kms. This temple houses a highly revered sitting Buddha image called "Luang Pho Khao Takhrao". The image was found at the mouth of the Mae Klong River in Samut Songkhram by the villagers of Ban Laem, who migrated from Ban Laem to Samut Songkhram during the fall of Ayutthaya.

Kaeng Krachan Dam This dam is located 53 kms. southwest of the town along the Phetchaburi-Tha Yang-Kaeng Krachan route. The construction was completed in 1966. It is 58 metres high and 760 metres long and 58 metres high, overlooking beautiful scenery of the reservoir and its islands.

Kaeng Krachan National Park This is the most extensive national park of Thailand occupying an area of 2,915 square kilometres and still largely unexplored. The national park office is located, 3 kms. beyond Kaeng Krachan Dam. It was declared a national park on June 12,1981, with clearly defined areas for a reservoir and year round green jungle in the Tanaosri Ranges, which are the origins of many rivers. The area is also rich in flora and fauna and has an 18-level waterfall named Namtok Tho Thip. About 54 kms. from the park office on the Sai Wang Won-Namtok Tho Thip route, there is a viewpoint affording magnificent views of misty mountains in the morning and suitable for bird and butterfly watching. Rafting along the Phetchaburi River takes some 6 hours, passing rapids and several smaller rivers.

Wat Mahathat Worawihan This old temple is situated by the Phetchaburi River in the town centre. There is a five-topped pagoda constructed in accordance with the Mahayana concept housing Lord Buddha’s relics. The stucco designs decorated on the vihara and the ubosot reflect the excellent skill of local craftsmen.

Phra Nakhon Khiri Historical Park This covers a hilly area with an old palace and historical temples in the vicinity of the town. This summer palace was built by King Rama IV in 1860. It was named " Phra Nakhon Khiri Palace", but the folk usually call it “Khao Wang”. It consists of royal halls, temples and groups of buildings, constructed mostly in harmonious Thai, Western neoclassic and Chinese architectural styles. The Phra Nakhon Khiri Museum on the western hilltop exhibits some royal paraphernalia of King Rama IV and King Rama V, decorative sculptures, and ceramics from China, Japan and Europe. To reach the hilltop, one can either walk or take a cable car.

At the foot of the Khao Luang Hill, there is a large monastery called “Wat Tham Klaep” or Wat Bun-thawi which has a very large hall and a chapel with beautifully carved door panels.

Phra Ram Ratchaniwet This palace of European architectural style is originally called "Wang Ban Pun". It is situated in the south of the town. King Rama V commanded it built as a rainy season palace in 1916. It was used to welcome and accommodate state visitors during the reign of King Rama VI.

Hat Chao Samran This historic beach is 15 kms. southeast of the town. Legend says that King Naresuan the Great and King Eka Thotsarot made several royal visits here and highly appreciated its beauty. The villagers thus rendered it a name "Hat Chao Samran", which means “Beach of Royal Leisure”. King Rama IV ordered a seaside palace built at this beach in 1918 and called it “Hat Chao Samran Palace”. 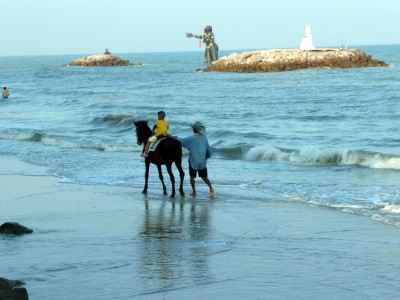 more than 500 links and information about Thailand